Rug News Magazine (now Rug News andDesign)  has been walking the market for a long, long time.  Sarah Stroh, the current andDesign Editor, was not yet 2 years old.  There was no color; all ads were B/W ¼ page, costing $200/ad. (Note a BW ¼ page still costs $200.) 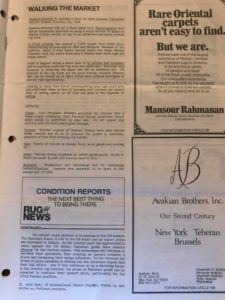 Einstein-Moomjay is opening a store on 58th between Lexington and Third Avenue, February 1st, 1980.

Einstein-Moomjay will be a block away from Bloomingdale’s who has an interesting approach to using a small amount of space to display a large variety of rugs in an attractive and easily worked rug area. 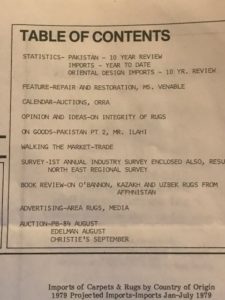 G. Fried Carpets has opened a 7,500 square foot retail store concentrating on area rugs at 28th and Madison. Because of the location, about 3 feet below ground level, the large display windows make the entire showroom a display rea when rugs are being turned.

G. Fried is located within a short walk to B. Altman and Company who completely redid the rug area to years ago..  Karastan was involved in the designing the space and did an excellent job.  Of interest to the rug trade are the good looking movable displays that can be locked up at night, which have reduced shortages of scatter rugs significantly 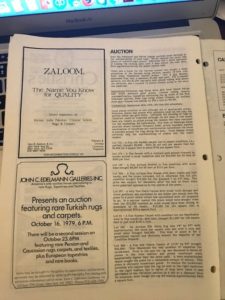 China:   VP Mondale promised the Chinese that a trade treaty containing Most Favored Nation treatment (lower duty) would be submitted by the yer end.  Do not expect any activity until the Salt treaty goes through.

Turkey:  Kurdish regions of Eastern Turkey have been placed under martial law so as to prevent the unrest in Azerbaijan province of  from crossing the border.

Iran:  Plenty of rumors to choose from; some goods are coming in.

India: Placing strong emphasis on better grade goods. 9x12s to retail for under $1,000 will be harder to find.

Romania: Production not increasing due to continuing industrialization. Imports expected to be down in the second half of 1979 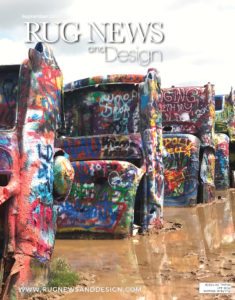 We’ve  changed with the market over the intervening 39 years.  Pick up a copy of Rug News andDesign – September 2017 at 295 Fifth Avenue during Home Fashions Week.

NOTE: We do not have the first issue of Rug News Magazine, G.A. Gertmenian does.

NEW from KAS the Provence Collection style 8623 Grey/Charcoal Kashan at...

Thomas Gensinger - Aug 2, 2015
These lustrous and silky rugs are designed in a trendy silver-blue metallic palette and are incredibly soft and beautiful. They are made of 100%...

Kathleen Bingham - Jan 31, 2020
I didn't expect to see a lot of folksy hooked rugs at Sotheby's and Christie's Americana sales. But there they were - about 16...