A version of this article was first published in May, 1982 in Volume 4, No. 3 of Rug News Magazine.

Court rugs, or city rugs have always been made from a design drawn by an artist. The talim, which is a called design, still requires a writer. Its main drawback is that a complete new talim must be written each time the size is changed. To the best of my knowledge talims are still being used only in Kashmir.

Before there was printed graph paper, the design would be drawn in quarter section, and ruled off into check patterns. In Kerman and other Persian towns this was a specialized function. But it also meant that there was some notion of `quality’ as instructions would be given as to the number of lines to be ruled.

Later in this issue, you will see a book cover Tabriz (Rahmanan). The design of that rug can literally be traced to a Persian book cover where designing reached a very high art form. The rug design is a derivative design. 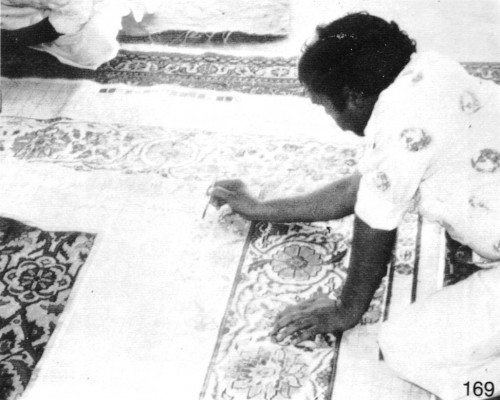 Shown OG 169 is a designer filling in the inner guard borders on PANDE CAMERON design. The next picture OG 170 shows the designer working on the corner piece. 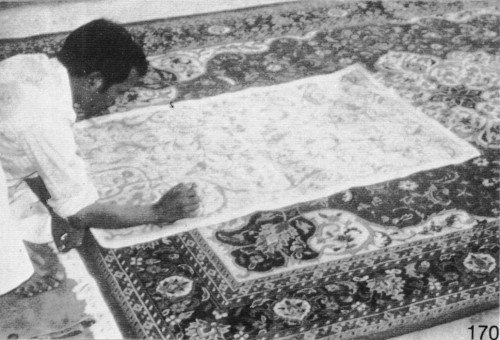 One of the advantages, and disadvantages of the checkpaper design is that the designer can enlarge or reduce the design more easily. This lends itself to program lines, as you can merely instruct copiers to make the design in a smaller pattern. This can often be a disadvantage with a Persian design as the pattern either becomes crowded, or the designer tries to make one knot do the job of two. In fact, one of the most telling comparisons that can be made of a programmed Persian line, is to place several sizes side by side and look for a consistent color balance, and design balance. Depending on what size the design was originally scaled for, design elements must be added or removed as the rug size changes. With open field rugs, and small repeat rugs, it is relatively easy to change the size. With the open field piece, the size of the ground takes most of the adjustment, and with small repeat rugs, the number of repeats in the ground are increased or reduced as necessary. 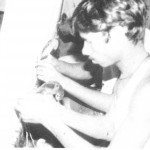 Since the borders in small repeat grounds tend to be larger repeats than the ground itself, the size change has to adapt to the border so that the corner turn doesn’t cut a border design in half. It’s like the lowest common denominator when adding quarters and eights, a quarter becomes two eighths.

When it goes on loom, the weavers work side by side, each doing the area that he can easily reach as shown in the above picture OG 171. Shown below is the knife that weavers hold to cut the pile as they pull in the knot in OG 172. 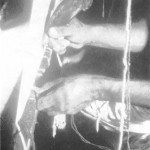 Please realize that when you look at the back of a carpet and you see even work you are looking at a cooperative venture of several weavers who must all pull the knot in with the same strength, and beat down the weft with the same strength in order for that carpet to come out square. In other words you are looking at a cooperative effort at a high skill level, particularly when you realize that the carpet is the size that it is meant to be, and it is square. We use the word square in the sense that the corners are square, even though the overall shape may be a rectangle. 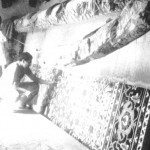 In this next picture OG 173 you will see a jamadar (loom inspector) looking at a very large Pande Cameron carpet on loom. Notice how the loom drawing is hung on string so that it can slide from one side to the other. The drawing itself being only one quarter, the weavers on the wrong side have to flop the design to make it work. The man standing is the loom owner. 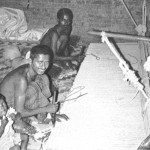 We mentioned before, the beating down of the rows of weft. Shown in this picture OG 174 is a dhurrie being woven on a horizontal loom. The men are holding beaters to beat the weft into position. The child is holding a plastic Boeing 747, which is indicative of the cultural gulf between the production of goods and the modern world. This loom, although not shown, is staked down, and tension on the warp is supplied by tightening ropes at one end. 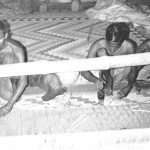 Shown here in OG 175 are the same two men in a head on view, beating in the weft, also showing the design. Photos courtesy of SHALOOM. 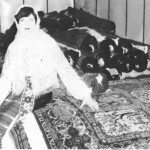 In this next picture OG 176 is shown the weaver who will be demonstrating the weaving of Rumanian rugs at the NEW ORLEANS TRADE fair and in ten other cities in the U.S. Sponsored by the Rumanian government, and MOMENI, she and three other people including a top flight designer, another weaver, and an interpreter will be touring the U.S. If there was ever an opportunity for a retailer to tell a designer what he wanted, this is it. 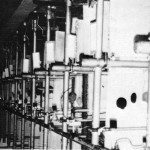 The looms in Rumania are different as this picture, OG 177 shows. Note the rows of steel looms. One of the reasons that Oriental rugs traditionally have bubbles is that the warp beams were not always perfectly smooth. The bumps would adjust the tension, which when relieved made the rug lie not flat. With these steel frames, the Rumanians get very even tension which accounts for the too great regularity in their weaving.

Note in OG 178, the young girls weaving, sitting there with the next row of looms just behind their bench. 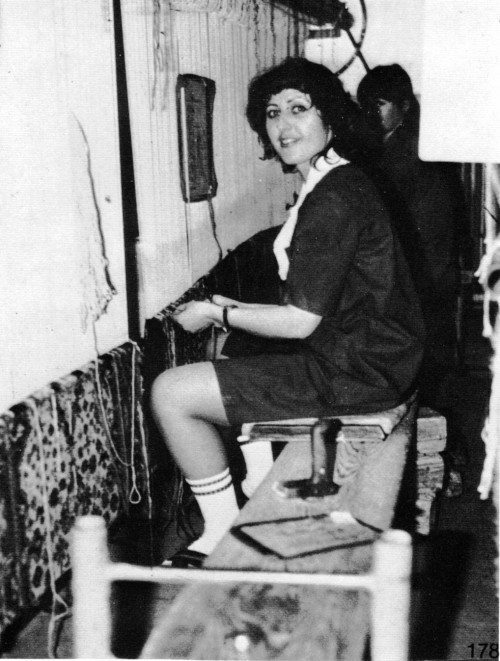 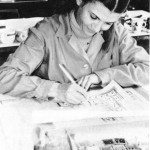 Shown in pictures OG 179 and OG 180 are check paper designs from Rumania, OG 180 being a close up detail shot of a designer doing exactly the same thing as the Indian designer on the Pande Cameron rug, filling in the colors. 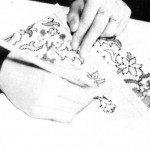 When you get to small silk rugs things change. Here one person weaves the entire rug, although as you can see in these pictures of Chinese girls OG 181, the rugs are mounted side by side, as if they were working on a large loom on one piece.

Trimming is done on loom, and for wool rugs, usually after the rug is off the loom it is sheared and if carving needs to be done, it is done flat. Note in picture OG 182 that the goods are being carved on loom. One of the things to look for in Pakistani rugs is hills and valleys from the shearing. An evenly sheared rug can cost more than one with hills and valleys, or at least it is more desirable, and may be easier to sell at the same price. 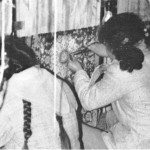 All rugs end up in a warehouse somewhere; the only thing that changes is the country of origin of the dust. Shown is the G.A. Gertmenian warehouse in L.A. as WM 183. The process is one of selection, and a lot of people doing specialized tasks have been involved. Only Allah is perfect, but there is a great deal of value when as many people as are involved in making just one rug can achieve such a high level of achievement. One of the reasons that we encourage all of our readers to walk the market, even if their customer won’t appreciate the cost of quality, is to get to know just how much of a variety of goods is available. 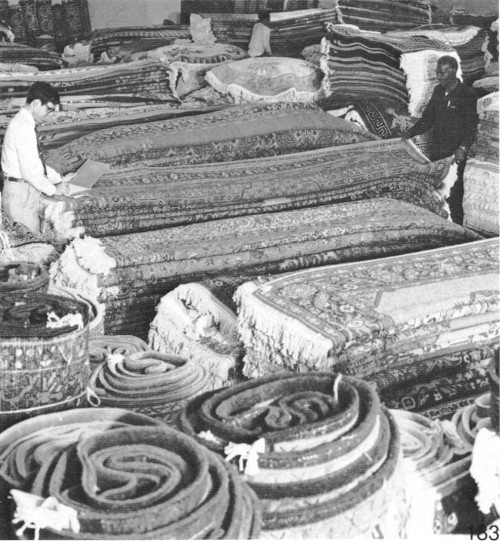 A version of this article was first published in May, 1982 in Volume 4, No. 3 of Rug News Magazine.

Thomas Gensinger - Aug 2, 2016
The wonderful design and gorgeous color of this rug will make it an amazing centerpiece for any space in any home! Available in 6...

Turkomans In Exile by Chris Walter